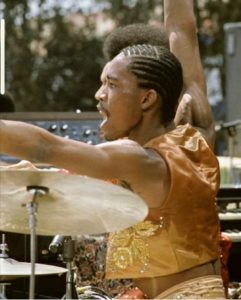 Just recently, while most of us still having our holidays’ hang-over, and still wishing and hoping that everyone to have a good year ahead, another Shining Star lit off. No given cause or Reasons, but I guess That’s the Way of the World.
2 January 2023, a statement by Verdine White was shared on Instagram, and here’s the post: 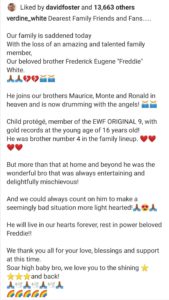 And here are some other photos shared by Verdine White in honor of his brother: 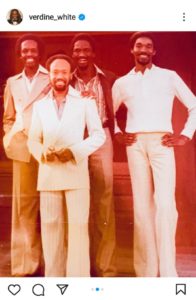 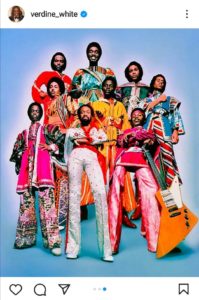 Born as Frederick Eugene Adams on 13 January 1955, Fred changed his surname to White to let everyone know that he was related to Maurice. He joined Earth Wind and Fire in 1974 and year later, the group rise-up to fame when their album That’s the Way of the World hit triple platinum! EWF became one of the best-selling groups of all time with more than 90 million records sold world wide!

Fred White stayed in the group until 1983, but he continued to perform with other bands. You can check his discography below.

Fred White passed away at the age of 67. And after hearing the news, tributes poured, and one of them was Lenny Kravitz who remembered him as the “True King”.

In the Stone where his name is already carved, Just Keep Your Head to the Sky, Every Now and Then, Be Ever Wonderful. Let’s Groove not only in September, let’s dance not only in our Fantasy, let there be always a Boogie Wonderland in our hearts. For sure, Fred and Maurice are always doing some Brazilian Rhyme up in there for us to dance and Sing a Song!